Just a quick update over here.  I will be working on the weekdays from 8 to 8 and on the weekends from 8 to 6 for the next couple of months.  I have not left you, but I am not sure if I will have any new content for a while (though I will try).  I like that people can come here and discuss many of these issues, so if anyone wants to write a guest post, I would be glad to have it!  You can email it to me at violetrealitybased@gmail.com.  It does not have to be some profound piece of journalism or anything; it just needs to be something to get the conversation going. 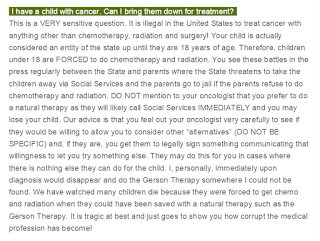 I came across this in the FAQ section of the Northern Baja Healing Center, which offers Gerson protocol though it is not the Gerson center in Mexico.  Well, I think that this speaks for itself so I do not have much to say, but I want to correct one or two things here.  Children are not an "entity of the state".  They can sometimes be made wards of the court if they are being neglected, and medical neglect would fall under this.  Also, it is not "illegal" to treat cancer with nothing but chemo, radiation, and surgery.  What is illegal is having a person who is not a real doctor offering non-evidence-based quackery as "the cure" for cancer.  That is what is illegal.  Think about the message this man is sending for a minute. A child diagnosed with leukemia who gets conventional treatment has an incredibly high chance of being cured of their cancer and living a normal lifespan.  A child with this same illness who goes to one of these clinics instead will die of their cancer.   Naturally there are quite a lot of people out there who are desperate to protect a child from this fate, and it is incredibly disturbing to me that this man offers advice on how to circumvent this.  A child has no ability to make decisions about his or her medical care because most of it is outside their understanding.  A child often has a limited concept of the permanence of death.   A child has a difficult time understanding that going through something incredibly unpleasant now will reap great rewards for the future.  It is for all these reasons that adults must make medical decisions of the child's behalf.  If a child with a treatable cancer gets taken to this place, he or she is going to die of their cancer.  This isn't "another option" or an "alternative"; it's a death sentence.
Posted by Violet at 10:44 AM 67 comments:

The Sad Case of Samantha Beaven

Today in the news there was a story about a young mother of two who died of cervical cancer at the age of 29.  That right there would have been a very sad thing indeed, but what makes this story doubly so tragic is that Samantha Beaven was lied to by a promoter of fantasy-based medicine and before her untimely death she wasted eight weeks and 60,000 GBP at a fantasy-based medicine "clinic" in Mexico, far from her native England.  Samantha's case is incredibly heart-breaking.  She had two young daughters to look after, and when she was pregnant with her second child, she noticed unusual symptoms like cramping and bleeding.  Despite eight different doctor's visits over this, she was assured that it was normal and related to her pregnancy.  Having been pregnant already once before, Samantha knew that something was not right, and she was diagnosed cervical cancer soon after she gave birth at 26 weeks.  She underwent chemo and radiation, which seemed to work but the cancer was later found to have spread to her lungs.  This case is most definitely a failure of reality-based medicine, or rather of the human beings who practice it.  I never argue that conventional medicine is perfect, and it most certainly has its fair-share of failures. It is not clear how long Samantha was having these undiagnosed symptoms, but if they started during pregnancy, then she must have been having them for around six months or so.  It is always so devastating to see something like cancer misdiagnosed for this long.  For a disease like cervical cancer that is quite treatable if caught early, it is especially devastating.  Could Samantha have been saved by conventional medicine if the first doctor had run some very simple tests?  Would she had turned to quackery if she had not gotten the blow-off from so many medical professionals?

Though the details are not there, at some point Samantha decided to go to Mexico to undergo a cancer treatment called hyperthermia therapy. Hyperthermia, apparently can be used to help treat some cancers, but as of yet is largely an experimental therapy and results are mixed as to its efficacy. What we do know is that it not the cure for cancer. At any rate, it can potentially be very dangerous and so it should only be administered by a highly-trained doctor who knows what she is doing.  This is one of those "therapies" which might have some potential, but which can quickly morph into quackery if used in a way (whole body) and on patients who can no longer receive any benefit from the treatment. To me, these are the most dangerous quack therapies out there.  They appeal to people who are intelligent and educated because they actually do have some science to back them up.  Unfortunately this does not translate to working a miracle on every person with cancer, no matter the type or stage.  Though not mentioned in any article, this treatment was ostensibly not offered to Samantha by any of her doctors in the UK, likely because they knew it would bring her no benefit.  To pay for it, Samantha sold her possessions and moved into a cheaper house.  Her six-year-old daughter even sold her toys on Ebay.  The family started a fundraiser so that it might raise the nearly 60,000 quid necessary to pay for the "treatment" in Mexico.  In the end, it did not work and Samantha returned in much worse shape than before and died within days of an infection, one of the possible side effects of hyperthermia.

So what was the harm here?  After all, so many people who promote fantasy-based medicine claim that if someone is already terminal, then there is no harm in trying an alternative.  Well, let's see.  Samantha left her two young children for eight weeks while she went halfway across the world to pursue a treatment which would not work.  Since this treatment involves raising the temperature of the body, I am going to have to assume that the treatment itself was unpleasant.  In those eight weeks she could have been home getting palliation.  Her daughters could have formed a few more good memories with their mother.   There could have been a few more moments of laughter, of reading stories before bed, of playing games, and going to the park.  They will never have the option to do any of those things with their mother ever again.  That was stolen from them by the people at the "clinic" in Mexico.  And what about the money she raised?  Well, in the grander scheme things money is not particularly important, but every mother I know with small children would take a lot of comfort in leaving them some money before she died.  Could this 60,000 GBP have been put in a trust to help the girls through university when the time came?  Well, now it is lining the pockets of some scammer in Mexico.  He or she won't be giving it back or anything.

Samantha is a perfect example of someone at their most desperate and most vulnerable.  Samantha did not just want to live; she needed to live.  She had small children to raise who needed their mother.  I have no doubt she was willing to do whatever it took to give herself a chance at life.  Unfortunately she was terminally ill with cancer and there were not any treatments left for her.  The family claims that it was not the cancer which claimed her life, but a lung infection, thus promoting the idea that this treatment would have worked for her.  This sounds all too familiar to anyone who has followed what happens in these Mexican "cancer clinics".  These places are not set up to treat disease.  A lung infection will go untreated.  If you're in Tijuana and you get really sick, then the staff might drive you across the border, drop you at a fast food restaurant, call 911 and bolt.  Otherwise, you get put back on a plane home and your doctor there is left to clean up the mess the quack in Mexico made.   If you develop a complication of any of these cancer "treatments" at a Mexican clinic, you will not get treatment for it.  It's a sweet little scam for them.  They get to claim that their "treatment" would have worked had you not gotten that nasty little infection, and the hospital in San Diego is left to pick up the pieces.

I want to make something very clear here: Samantha and her family are 100% the victims in this case.  They were at their most vulnerable and most desperate, and at a time when they had lost all hope, someone came along and promised to be their savoir.  If they had any skepticism or doubt, then the salesperson at the "clinic" would naturally have assured them that there was science to back this up and that it was only not used in countries like the US and the UK because of some conspiracy by big medicine to suppress "the cure" for cancer.
Posted by Violet at 8:20 PM 36 comments: